Biomaterials are obtained from either natural or synthetic substances. They are engineered to interact with biological systems for biomedical applications. We are currently exploring a bioinspired approach involving a bottom-up strategy for synthesizing supramolecular gels to generate novel soft biomaterial candidates.

There is a critical need for soft materials in the field of regenerative medicine and tissue engineering. However, designing injectable hydrogel scaffolds encompassing both adequate mechanical and biological properties remains a key challenge for in vivo applications. Here we use a bottom-up approach for synthesizing supramolecular gels to generate novel biomaterial candidates. We evaluated the low molecular weight gels candidates in vivo and identified one urea-containing molecule, compound 16, that avoid foreign body reactions in mice. The self-assembly of bolaamphiphiles creates a unique hydrogel supramolecular structures featuring fast gelation kinetics, high elastic moduli, thixotropic, and thermal reversibility properties. This soft material, which inhibits recognition by macrophages and fibrous deposition, exhibits long-term stability after in vivo injection.

Controlling the interface between biological tissues and electrodes remains an important challenge for the development of implantable devices in terms of electroactivity, biocompatibility and long-term stability. In order to engineer such a biocompatible interface a low molecular weight gel (LMWG) based on a Glycosylated Nucleoside Fluorocarbon amphiphile (GNF) was employed for the first time to wrap gold electrodes via a non-covalent anchoring strategy, i.e., self-assembly of GNF at the electrode surface. Scanning electron microscopy (SEM) studies indicate that the gold surface is coated with the GNF hydrogels. Electrochemical measurements using cyclic voltammetry (CV) clearly show that the electrode properties are not affected by the presence of the hydrogel. This coating layer of 1 to 2 microns does not significantly slow down the mass transport through the hydrogel. Voltammetry experiments with gel coated macroporous enzyme electrodes reveal that during continuous use their current is improved by 100% compared to the non-coated electrode. This demonstrates that the supramolecular hydrogel dramatically increases the stability of the bioelectrochemical interface. Therefore such hybrid electrodes are promising candidates that will both offer the biocompatibility and stability needed for the development of more efficient biosensors and biofuel cells. 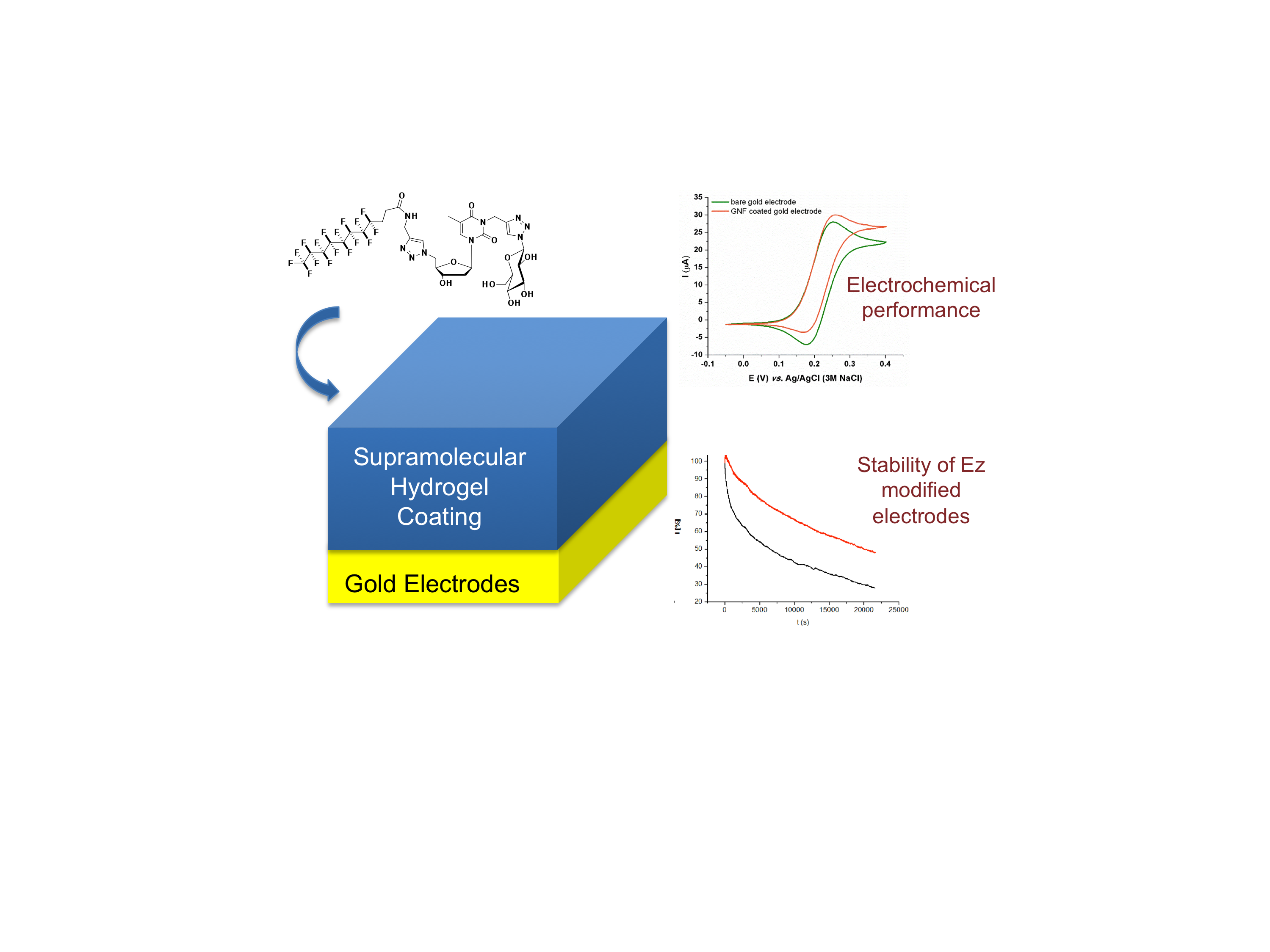 The growing use of nanomaterials and their associated risks necessitate the emergence of efficient decontamination systems. The main objective of this study is to develop a new prototype based on artificial supramolecular hydrogel capable of removing nanoparticle (NP) waste and nanomaterial by-products from aqueous suspensions. We demonstrate the high trapping efficacy of the low-molecular-weight gelators (LMWG) for very small particles (quantum dots (QDs), gold nanoparticles (AuNPs), TiO2 nanoparticles (TiO2-NPs), below 50 nm in diameter) from aqueous suspensions. The performance levels of removing nanoparticles from contaminated effluents could lead to a competitive alternative to filtration and dialysis devices