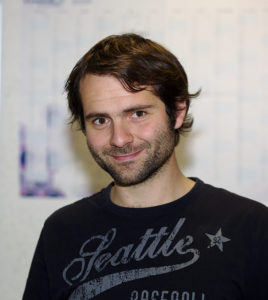 Career history. Bruno ALIES received his doctorate in chemistry from the University Paul Sabatier at Toulouse, France in 2012. He was then a postdoctoral fellow at Duke University (Durham, USA) in the group of Prof. Katherine Franz (NIH Funding). In 2015, he was appointed as a temporary lecturer at the University of Bordeaux and as Associate Professor at the same University in 2016.

Research. Bruno ALIES is Associate Professor at the University of Bordeaux in ChemBioPharm research team (Université de Bordeaux – Inserm U1212 – UMR CNRS 5320) lead by Prof. Philippe Barthélemy. His area of research includes Medicinal, Inorganic, Supramolecular and Physical Chemistry. One of the major objectives of his research is to understand supramolecular assemblies of novel bio-inspired amphiphiles and the ability to tune them via the use of metal ions, aiming various applications from sensing to drug delivery systems.